skip to main | skip to sidebar

Papilio Albus for soprano and chamber orchestra performed by the Oberlin Orchestra, 1996.

Kist for orchestra performed by the Yale Philharmonic Orchestra, 1998.

ittar for chamber orchestra performed by the Malaysian Philharmonic Orchestra during MPO Forum for Composers Phase I 2003.

topeng 1 for orchestra performed by the Malaysian Philharmonic Orchestra during MPO Forum for Composers Phase II 2004.

Composition for Piano No.8 performed by Loo Bang Hean for a CD recording of ‘Malaysian Contemporary Music Vol.1’ produced by Hardesh Singh and CH Loh in collaboration with ‘Off The Edge Magazine’, February 2008.

the dancing mouse [vocalize version] for soprano and harp based on a poem by William Radice of the same title. The poem is taken from a set of 14 poems that form the last part of a new book published separately in June 2008 English-German, illustrated edition by Hirundo Press in Hamburg. The recording performed by Helen Radice on Harp and soprano Angelika Huber for the book launch in Hamburg.

Dying In Order To Live for soprano and piano. An excerpt from an opera in progress based on a libretto Conference of the Birds by William Radice. Excerpt premiered on 13 July 2008 at the Kuala Lumpur Performing Arts Center during the HSBC Young Composers Workshop 2008. Chin Yen Lin (soprano) and Chee Su Yen (Piano).

Conference of the Birds an opera. Libretto by William Radice. The opera is based on a 12th century Persian poem Mantiq-ut-Tayr by Farid ud-Din Attar. A workshop performance of about one hour in length took place at the Wawasan Open University Penang on November 20 - 22, 2009. Produced by the Five Arts Centre. Marion D'Cruz as Executive Producer and James Lochhead as Penang Producer. This version is an electronic based music accompaniment to voice.

whose shadow would fall on for trombone and piano. Written for Dirk Amrein (trombone) and Juerg Henneberger (piano) premiered on 24 July 2011 at School of the Arts, Universiti Sains Malaysia Pulau Pinang.

the dancing mouse choral version to be performed at the 29th Asian Composers League Conference and Festival in Taiwan on the 27th November 2011 by the Taipei Chamber Singers. (the performance of this piece was replaced by "whose shadow would fall on" revised version for clarinet and piano).

whose shadow would fall on revised version for clarinet and piano to replace performance of "the dancing mouse" at the 29th Asian Composers League Conference and Festival in Taiwan 2011.

the dancing mouse rearrangement of selected settings for mezzo soprano, clarinet, cello and piano. To be performed and premiered by Bridges Collective Ensemble in Melbourne (pre-tour March 2012, UiTM and at the KL Pac (April 2012).

the doctrine of final causes for solo oboe. Written for Amari Barash. Performed in the USA 2012.

songs and soundscapes for the play "The Sandpit". Performance in March 2012 at Penang Performing Arts Centre.

He too a simulacrum, that another person was dreaming him. for 2 flutes, 2 oboes, 2 clarinets and 2 bassoons. This work was commissioned by the High Winds Ensemble for a performance in 2013.
Posted by johan at 5:10 PM

Hi kawan! So happy to see this, I stumbled upon it by accident! Bilanglah, pada kawan kawan u semua!

Conference of the Birds 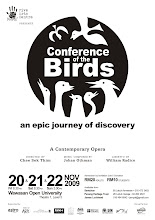